The origin of Kaup is in the Aschaffenburg district Leider. A blacksmith’s shop was founded there in 1894, which later specialised in repairs of river navigation and crane equipment.

At the beginning of the 1960s, under Otmar Kaup, the company was focused on producing attachments for forklift trucks. Later, container spreaders and stationary equipment for material handling followed. Today, the family business is run by Holger Kaup in the fourth generation. Besides its headquarters in Aschaffenburg, the company operates twelve subsidiaries and is represented by 20 independent agents in 34 countries.

With numerous pioneering innovations and designs, Kaup has succeeded in offering its customers the optimum solutions for their material handling tasks over the past five decades. Today, many forklift trucks fulfil their tasks with Kaup know-how. The product diversity is made possible by a high level of vertical integration and a sophisticated modular system from which almost all individual customer requirements can be configured.

“More than 30 design engineers work at our company headquarters in Aschaffenburg to develop new equipment and further improve our existing equipment. We try to solve practically every handling task our customers have”, says Holger Wolfert, master tool maker at Kaup’s CNC production.

Numerous industry-wide innovations from Kaup speak volumes in this regard, such as the multi-pallet device, which could hold up to eight pallets simultaneously for the first time, or the development of a 30-tonne turning device for emptying railway wagons. 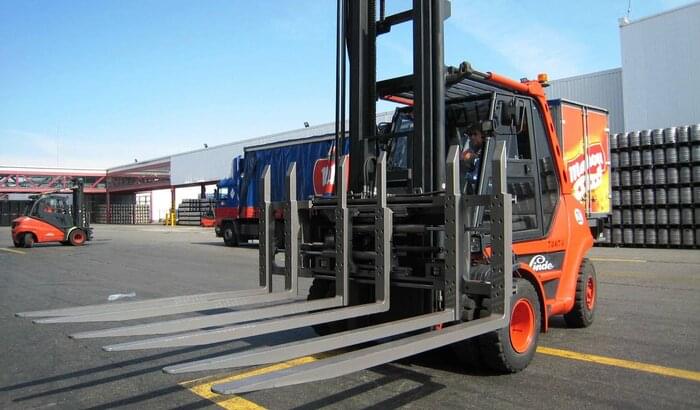 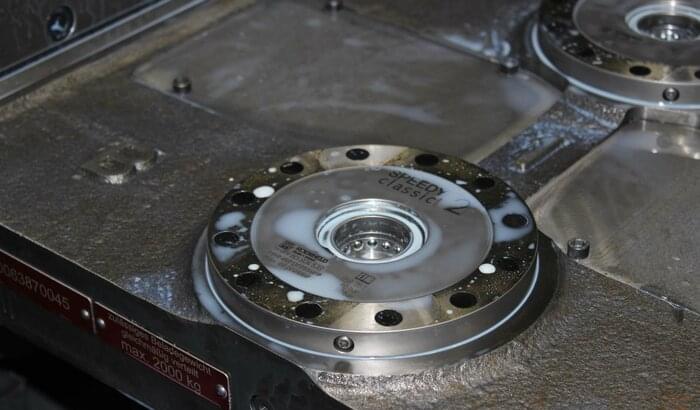 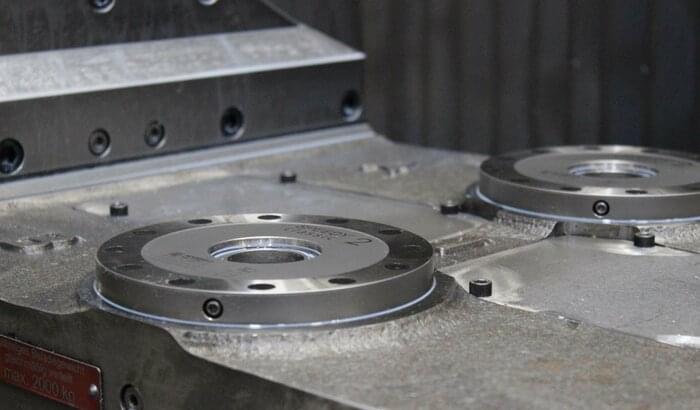 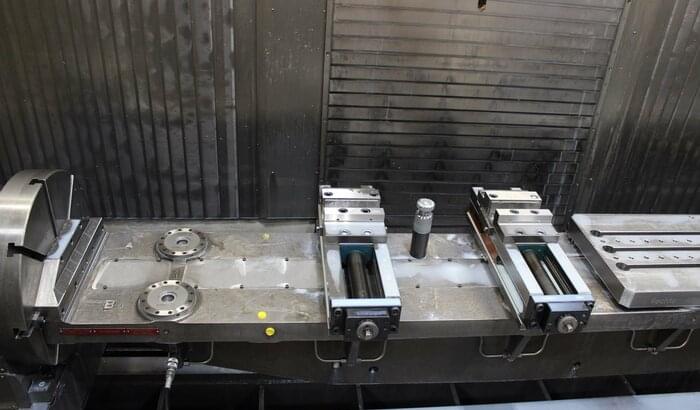 Innovations for the Future

The company headquarters in Aschaffenburg has 46,000 m2 of production space, equipped with more than 60 CNC machines and 22 welding robots. The modern production facility is constantly adapted to changing requirements and brought up to date with new machinery. This was also the case at the end of 2017 when three new AXA machining centres were purchased.

“The machine tools from AXA are sturdily built, have good accuracy and are very reliable. However, with the new AXA VSC50, we had the problem that the clamping bridge of 3 metres that we wanted was not offered by the machine manufacturer. Therefore, we were forced to find a supplier who could offer us such a long clamping bridge. With a length of two meters it would not have been too difficult, but with a length of 3 metres the wheat is separated from the chaff. The machine also has a feed force of 20 kN. Immense forces are exerted on the clamping bridge and a lot of experience is needed,” Holger Wolfert explains the challenge.

Kaup found what he was looking for with Stark Spannsysteme from Voralberg, Austria, a company of the Römheld Group and specialist in zero point clamping systems.

Due to Kaup’s specifications, only a cast variant came into question for the design department at Stark for the bridge. “With cast iron, the shape of this bridge can be completely different than with steel. A steel plate would have been too heavy and the bridge would have bent due to its own weight, but at the latest due to the load during machining”, says Robert Hartmann. Stark’s designers had to find the right balance between the highest possible stability and the lowest possible weight. Another complicating factor was that the bridge had to be designed so that workpieces could also be machined from below with tools as long as possible.

"We manufacture individual and special products on this machine. We often have to take parts down to clarify something constructively or have it checked. In the meantime, other parts should be produced on the machine to be productive. Besides the clamping bridge, we consequently wanted a fast and precise changeover and the possibility to machine the parts from all four sides with only one clamping", explains Wolfert.

After various tests and discussions, including with the design department at Kaup, Stark Spannsysteme finally decided on the zero point clamping system STARK.classic.2. This system is ideally suited for this special application thanks to the low installation height and the active spring force. “The size, the forces of the machine, the weight, the desired overhead machining, and the price-performance ratio, all these were reasons why we choose the STARK.classic.2 system”, says Hartmann. Due to the desired pallet size and the number of vices used, it was decided to use a grid of a total of 12 STARK.classic.2 NG fast-closing clamps.

The zero point clamping system STARK.classic.2 used at KAUP is robust and ideally suited for individual parts as well as small and large series. Due to the special retractable nipple contour and the coordinated radii, no damage occurs to the fitting diameter when retracting into the fast-closing clamp. No swarf can get jammed in the cylindrical bore. Due to the optimal force flow – the retractable nipples are permanently positively and highly precisely fixed by spring force – no bending or lifting is possible. Thus, also a high positioning accuracy is guaranteed.

Furthermore, STARK.classic.2 can be equipped with an integrated media duct on request for the passage of media such as oil, air or water. Kaup opted for an external hydraulic version attached to the clamping bridge via a quick-disconnect coupling.

“This solution makes our bridge machine-independent and we are extremely flexible. We mainly produce clamp bodies, individual and special products on this machine. We can now machine our components from all sides in one set-up. We prevent inaccuracies during clamping. Thanks to the external set-up, we are now faster, more effective and thus more productive. The deflection of the bridge due to its own weight (approx. 1080 kg) is also max. ± 0,05 mm in the middle with this solution, which is an excellent value and is of course significantly reflected in the quality”, explains Wolfert.

Our suppliers are important partners with whom we strive for long-term business relationships. It is not about one-sided and short-term success, but about a partnership based on quality, reliability, economic efficiency and fairness on both sides.“
Holger Wolfert, Werkzeugmachermeister
Fazit
"We have found such a partner with Stark Spannsysteme.”

Today, cost savings in manufacturing are increasingly only possible in machine set-up or in shortening process times. The use of a zero point clamping system saves costs and guarantees µm-accurate positioning and repeatability.

“With a zero point clamping system from Stark, the customer not only acquires a clamping system that meets the highest quality and precision requirements, but he also gains a 30-year know-how advantage and a considerable reduction in set-up and changing time. Drawing in, positioning, clamping, releasing and lifting out – STARK.classic.2 integrates everything in one intelligent clamping system”, concludes Robert Hartmann, and Holger Wolfert adds: “Our suppliers are important partners with whom we strive for long-term business relationships. It is not about one-sided and short-term success, but about a partnership based on quality, reliability, economic efficiency and fairness on both sides. We have found such a partner with Stark Spannsysteme.”

We are here for you.

Do you have questions about your customer account, enquiries or orders? Please feel free to contact us.

Take advantage of the free benefits of our login area:

Register for free
Login
Welcome back